Real Estate Must Be Virtual, For Now

Chaos! Every day brings a new interpretation of the current edicts given by all the heads of state—the president, the governor, the mayor, CAR (which is the California Association of Realtors), the police, I’m sure there’s more. As of Thursday, March 26, 2020, basically, we are supposed to stay home except to procure food, health care, to walk, or perform an essential job. Therefore, we Realtors are in a curious Catch-22 situation: we can’t meet buyers or sellers at a property, we can’t order inspections because inspectors aren’t considered essential (but sellers can hire them to find out if they need repairs if they want or need to do),  buyers can get loans and appraisers can do desktop appraisals, escrow companies can work, counties can record sales, movers are considered essential, but if sellers sell and they need to buy another home can they? If you see some inconsistencies in all that, you are correct!

So as of today, March 12, 2020, Coronavirus cases are spreading - first there’s one case reported, then 2, then 100, then a thousand. Universities and other schools aren't having live classes. Germy kids get to stay home and only infect family members and caregivers. The NBA has suspended the season. Wow! And mortgage interest rates are so volatile that lenders aren’t publishing them. In fact, some lenders aren’t taking any new or refinance business because they have more than they can handle.

Tracy King
Real Estate
Should you buy a house in 2020? Of course, this is a question that has a very complicated answer.
Two reasons that the answer is no: prices are high and inventory is low. Yes, interest rates are historically low which makes paying these historically high prices a little more bearable. Low inventory means a couple of things: it's hard to find the home of your dreams at the price you feel you can afford; it's extremely competitive in our market (we had 47 offers on one home in January, and we heard of another house nearby that had over 50 offers and is going $400,000 over the asking price!); also, it means the thought of buying your dream home (or any home) contingent on the sale of your current home is a losing proposition. Would you entertain a contingent sale on your own home? Probably not, because you want to minimize the things that can go wrong with the sale so you can move to the next step in your life without depending on variables you have little or no control over (like the price of the contingent home or the skill of the agent involved).

Despite those issues, I'm in the camp of yes, this is a good year to buy a home. I know what you're thinking - of course the Realtor thinks everyone should by a house right now! But the reason why?
Continue reading
701 Hits
Tweet
701 Hits

It Pays to be an Older Homeowner

At last, a reason to be glad you’re older: California Proposition 60/90! If you or your spouse are 55+ and you’ve owned your home awhile, you might find this interesting.

What a Difference 15 Years Make! 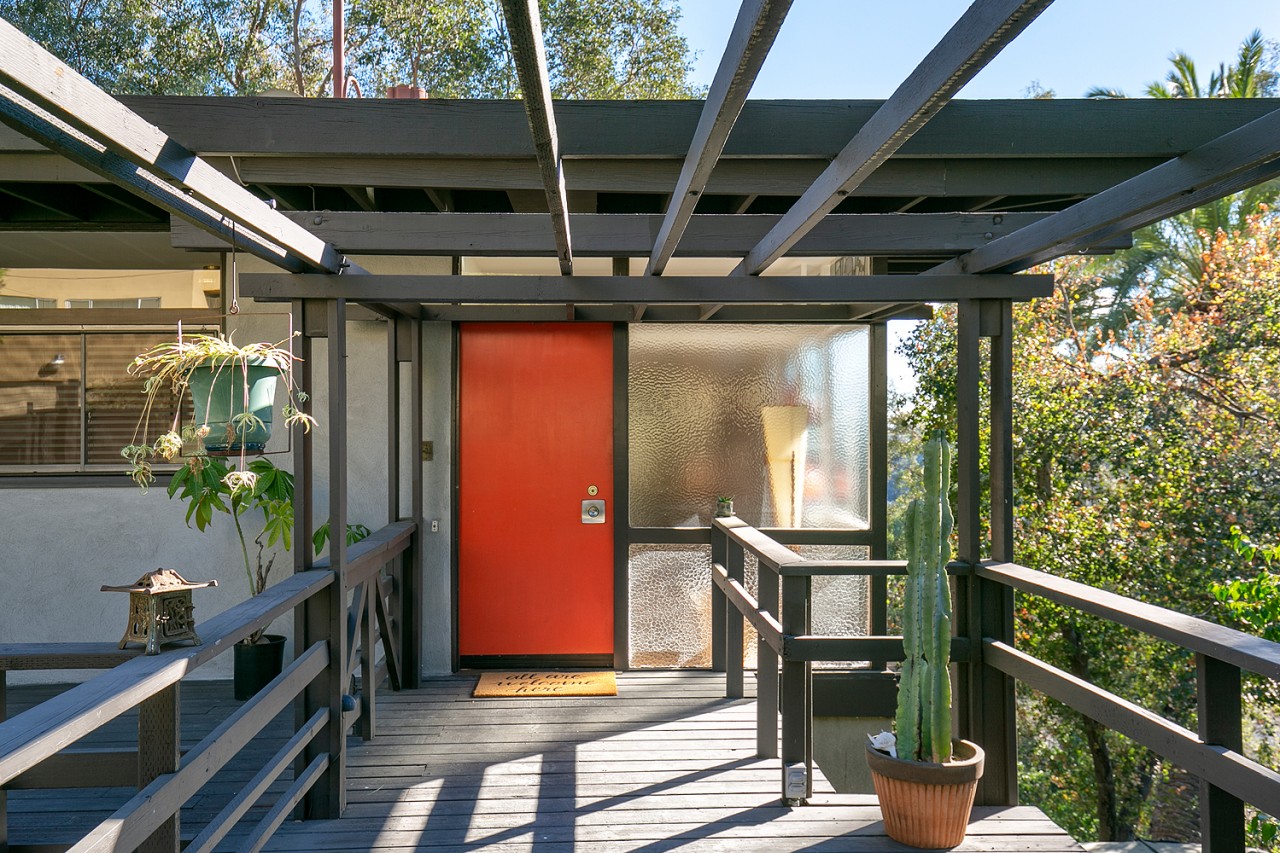 It’s interesting to look back fifteen years and compare 2019 and 2004 because 2004 was a year of big fear and doubt. Many people questioning “will the economy go up? Down? If I buy a house now am I buying at the top of the market?”  Sound familiar? These are the same questions we're hearing from our clients now!

Let's take a look at the numbers, and then I'll dive into my interpretation: 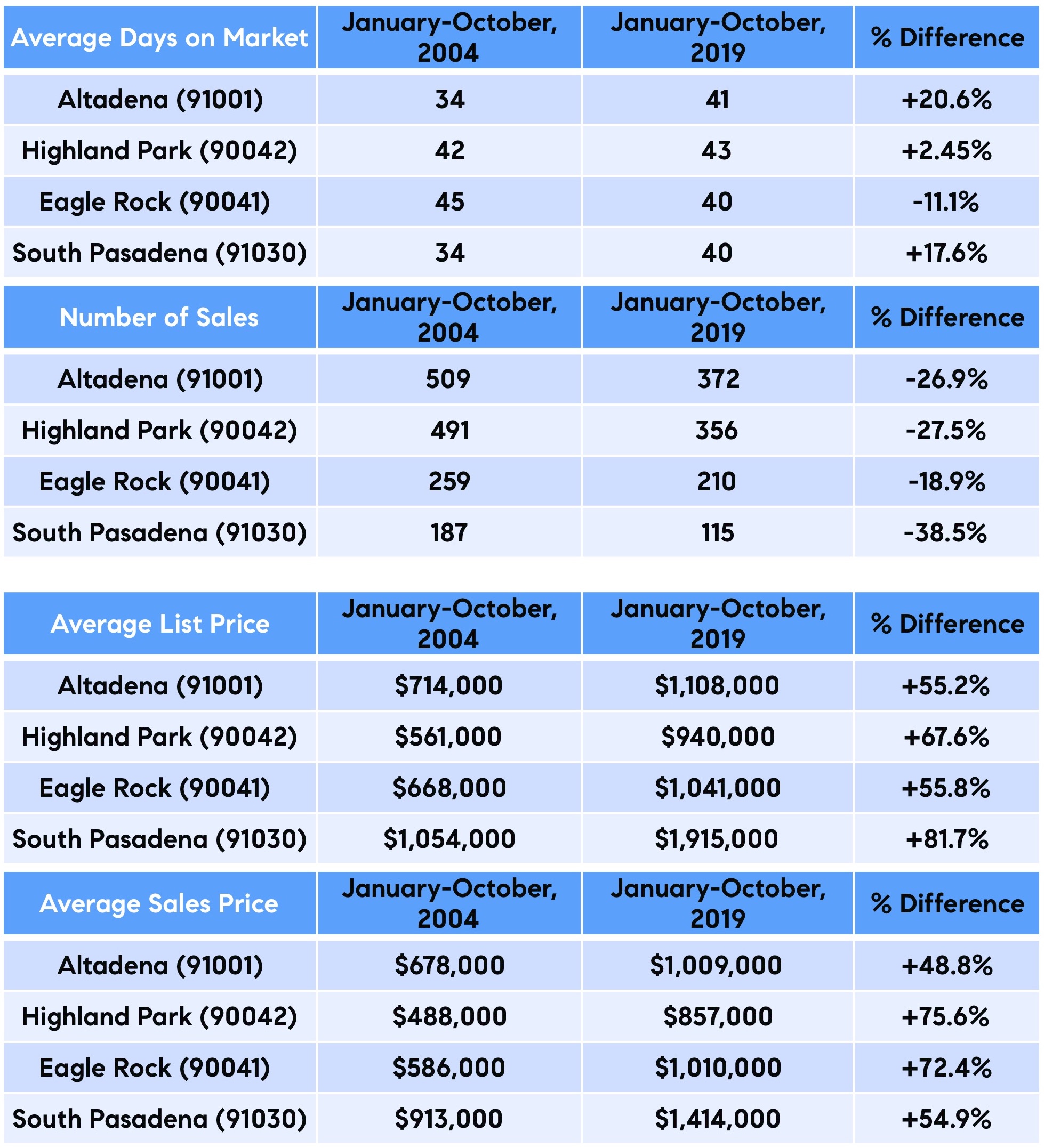 Look at things like the $500,000 difference in the South Pasadena List Price/Sales Price this year—that issue would seem to be that the higher end of sales isn’t selling as much as the lower in South Pasadena. Makes sense, right?

Obviously, home sales prices have gone up a lot in 15 years in all these communities. The average number of sales has gone down and the days on market is all over the place. We aren’t seeing the general interpretation by experts on the market that we hear on the news—which is that days on market is increasing everywhere while the sales price is going down.   In these areas, the sales price keeps going higher and higher.  But why are we seeing the number of sales drop? Affordability? Choice? Probably a little of both. Less inventory, that is, far fewer available listings are on the market now than in 2004 and this has been the case since 2012. The higher end of the sales today in most of these zip codes are primarily high-style flips or new construction. That wasn’t the case in 2004 at all.

Flipping with style really started as a result of the glut of foreclosures and short sales in 2008-2011 and it started in places like Highland Park, where a few flippers bought foreclosures really cheap, fixed them up nicely and stylishly, then resold them at fairly reasonable prices to first-time buyers with some money of their own or with help from their families. Now the flips are the high end of the market.

Altadena is really interesting because the average sales price was almost $100,000 higher there than Eagle Rock in 2004, and the average sales price this year is almost the same as Eagle Rock.  What does this fact mean? More choices in Altadena? We have sold several houses in Altadena this year because our buyers felt they had better choices in their price range—more house, more lot size, and sometimes the basic ability to purchase a home now for what they could afford instead of waiting to save more money or win the lotto or find some windfall somewhere. Eagle Rock has appeal because of its location—close to downtown, close to the studios, easy to get around in town and to get out of town. Also it’s neighborhoody (great community feel), has decent public schools, and is kind of a Mayberry-type suburb of Metro LA. And it’s cheaper than Los Feliz and Silverlake.

There is no clear conclusion to draw from all this, except that prices are still going up with no end in sight in these areas, so waiting for the crash is likely futile for the time being. When will the bubble burst? Maybe not for several years, maybe never. Only time will tell. It's usually luck that allows people to "time" the market. We often tell our clients that the best time to make their move is when they are truly ready!

Want to get regular updates on the local real estate market? Sign up for our semi-weekly newsletter here!